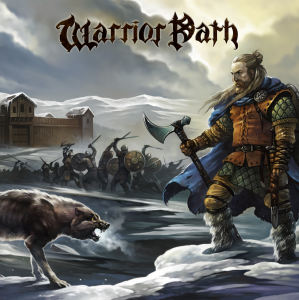 Literally out of nowhere, Greek semi-supergroup Warrior Path pop up into the metal world with big names sure to draw the attention of classic heavy metal fans; Bob Katsionis of Firewind and Yannis Papadopoulos of Beast In Black united! The catch? Neither of them were involved in the composition of Warrior Path‘s self titled debut. One day, previously unknown newcomer Andreas Sinanoglou meets with Katsionis and performs the album he’s had in his head since forever start to finish. And it was impressive enough for Katsionis to produce it and even get Yannis on board.

With those names – and maybe you listened to the pretty speedy single “Sinnersworld” already – one could expect a first-class European style power metal orgy, but despite the cover art and track titles like “Riders Of The Dragons”, the unsuspecting listener is in for a quite different ride. Like many of their fellow countrymen and other southern European (Italy, to be exact) bands Warrior Path deliver a sweeping epic metal experience. The record is bold in many ways, the first one being opening with the 7 minute, hulking great “Riders Of The Dragons”. Those 7 minutes however showcase Warrior Path‘s style perfectly: the union of Yannis’ soaring vocals, the maiden-esque lead guitars, a catchy chorus and even some acoustic parts make for a great epic, albeit quite the speed bump for anyone not prepared and looking for easy listening. Sinanoglou has bigger plans than that.

Like any good epic metal record, Warrior Path features not only downtempo revelry but a fair amount of variety in the shape of more classic power metal tracks as well. The aforementioned “Sinnersworld” along with double bass bangers such as “Fight For Your Life” and “The Hunter” provide the much needed relief between great epic metal tracks like the 10 minute “The Path Of The Warrior” and a few almost ballad like tracks. Over the course of an hour, Sinanoglou proves a man of many influences and great songwriting qualities. Be it the classic Manowar style epic metal, more straightforward Maiden melodies or even symphonic elements sprinkled just enough to supply atmosphere without being annoying, it is hard to believe all those ideas fit into one record.

Just as expected, a dream team of the Greek metal scene can’t do wrong, and Katsionis did right in giving Sinanoglou his attention. Let’s hope that Mr. Sinanoglou is not a one hit wonder and has some more albums of this caliber stored in his head. For now, Warrior Path is one of the most interesting and varied records to be released this year.