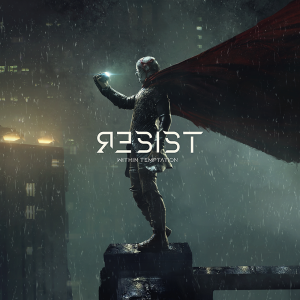 One of the things that Within Temptation are very good in is their ability to adapt – starting from a gothic/doom niche, the Dutch metal institution set up to record symphonic masterpieces followed by an explosive concoction of pop, retro and modern sound, joining forces with names even outside the rock scene. Resist marks the longest creative pause for the musicians whose career as a group was about the end long before the record’s release.
The album is an attempt to salvage what’s left of Within Temptation‘s past grandure and allow them to move forward. Behind the initial Black Mirror-ish concept one gets a glimpse of the band’s desire to start anew, focusing on what they do best – after all, we’ve seen them successfully battle their musical burnout, resulting in addictive spins such as The Unforgiving. Instead of a true return to form, however, a chaotic PR campaign marked the delay of the album, half of which we were already familiar with thanks to a prematurely supporting tour. END_OF_DOCUMENT_TOKEN_TO_BE_REPLACED